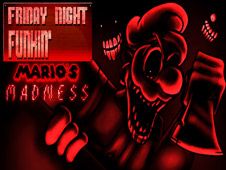 We continue the series of FNF Mario Exe mods with even more creepy versions of him, Luigi, and other iconic characters in this video game series, but this mod is the biggest one so far, as you can obviously see from the tracklist:

Can you eliminate Mario's Madness from FNF?

In both the story mode and free play mode, make sure you keep hitting your notes until the song's end to win the battles. To do that, watch for when the arrows match above BF and press the same arrow key to hit your notes. If you miss doing it many times in a row, you lose and have to start again, so focus and win instead!