Fun is Infinite vs Majin Sonic 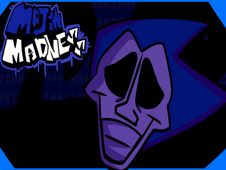 Majin Sonic and his madness of FNF returns right now with a full fun week, three songs in one, which is not something you had before with this character in this series, so we hope that you won't miss out on this game for anything in the world! Here's the tracklist:

In either the story mode or free play mode, reach the end of the songs to win, something that is achievable only if you keep playing your notes until the song's conclusion.

To do that, when arrow symbols float and match above BF, that is when you have to press the identical arrow keys, and if you get the timing right, the note is hit.

If you miss hitting notes too many times in a row, you end up losing, so focus not to let it happen. We wish you the best, and hope that you stick around for more fun!