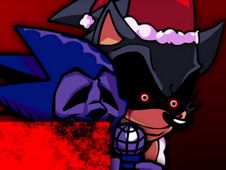 Three types of evil speedster hedgehogs, Majin Sonic, Lord X, and Sonic.EXE are now going to sing together a song that quite fits a group like that, because it is called 'Blood Red Snow', and despite its title, it is quite a jolly song, for that matter. Let's help them bring it to the end!

Watch as arrow symbols float and match above your character, which is the moment when you have to press the identical arrow keys to hit your notes, and if you keep hitting your notes until the end, you win. If you miss hitting notes too many times in a row, you have to start again from scratch again. Good luck, all the best we wish you!