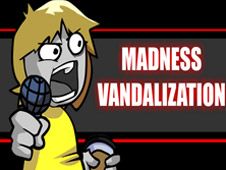 What is FNF: Madness Vandalization?

The crossovers between FNF and Madness combat keep on coming, and we're excited for that, you are excited for that, so everyone should be happy that right now we get to offer you the game known as FNF: Madness Vandalization, where your music rivals will be Gabriel Barsch, a madness animator from YT, as well as Demoman from TF2, on a total of two songs:

Vandalize your rivals with your amazing rhythm skills!

Whether you are playing in the story mode or free play mode, your goal remains the same, and it is reaching the end of the two aforementioned songs by playing all their notes according to their charts.

This is done by pressing arrow keys at the same time as the identical arrow symbols above BF match one another, but be careful not to miss pressing the keys multiple times in a row, since that means you will lose.

Good luck to you all, and we hope that you stick around, since more fun is still coming, only here, only for you!