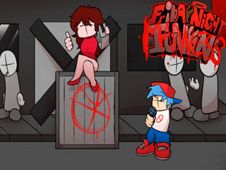 What is FNF: Friday Night Madness?

All of the FNF x Madness Combat mods added on our website so far had been received very well so far, so it was only a matter of time until we had a full-fledged mod inspired by the series, just like you get to play for free right now when we invite you all to enjoy the game called FNF: Friday Night Madness, where you and BF have to defeat the faceless minions of Tricky! Do it on the following custom songs, in either the story mode or free play mode:

Defeat the enemies not through combat, but through rhythm!

When you see the arrow symbols above BF being matched with one another, that is your queue to press the same arrow keys on the keyboard, and you have to keep on doing it so until the end of the song because that is how you win.

Now, if you keep at it and press the keys correctly one after another, you will win, but be careful not to press too many of the keys wrong, because if that happens too much, you lose the game and have to start again. Enjoy!