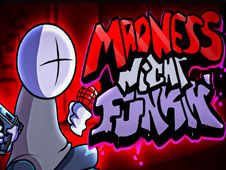 What is FNF: Madness Night Funkin’?

Crossovers between FNF Games and Madness Combat Games are some of the most popular ones you will ever get to find in this category, which is why we are excited that a brand new one has just been added here for you, a mod is known as FNF: Madness Night Funkin’, which at the moment of this writing only has one week, where you go up against Grunt, but more will be added soon enough. Until then, enjoy the following songs:

Sing and dance with your favorite Madness Combat characters!

After choosing between the story mode and free play mode of the game, give it your best to reach the end of said songs by playing all their notes according to their charts, since that is how you achieve victory!

To do this, watch for when arrow symbols above BF match one another, and press the same keys, but be careful not to miss pressing the keys, or you lose after too many mistakes. Enjoy, and have fun!