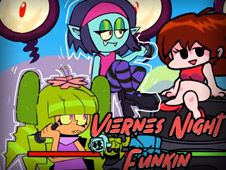 What is FNF: Viernes Night Funkin’ ?

The new and awesome FNF mods online that we can offer you for free on our website are not stopping anytime soon, just like you can see right now when our administrative team is inviting everyone to have the utmost of fun possible with FNF: Viernes Night Funkin’, featuring two new antagonists and lots of awesome new songs to enjoy!

Meet Venus and Eve from the FNF Viernes Mod:

Firstly, we've got Venus, whose hair is like cacti, and who has got a pink and yellow flower on top of her head. Then there is Eve, the vampire girl with purple hair who can float around. They are original characters made especially for this series, and their original custom song is called Viernes, which means 'Friday' in Spanish! Can you help Boyfriend defeat them both?

To do so you will use the arrow keys, pressing them when the same arrows match above BF's head, and if you do this to the end of the song and the progress bar has turned green, you win. Be careful not to hit wrong notes, because doing that too many times in a row will cause you to lose the game. Good luck!