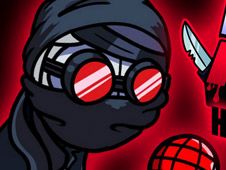 What is Friday Night Madness vs Hank High Effort?

The assassin known as Hank coming from the Combat Madness series of games is already a popular character here in our series of FNF Games online, and you've already battled against him as well as him, but today you are going to do it once more, only this time with the game called Friday Night Madness vs Hank High Effort.

This is a game where the difficulty of the songs and charts of Hank's getting more difficult, giving you a harder challenge, but a more rewarding one too. So far, this demon version includes the song known as Mercenary.

Defeat Hank from FNF on the hardest songs ever!

If you don't know the simple rules of the game, worry not, as we will explain them to you right now. When arrow symbols above BF match with one another, you will press the same arrow keys at the exact same moment as that happens. That is how you hit the notes of the songs, and if you do it until the end of the song, you won!

Of course, this means being careful and not pressing the keys at the wrong times, since that is a miss, and having made too many misses one after another means losing the game. Good luck, enjoy!