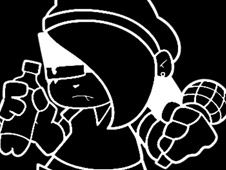 What is Friday Night Funkin vs Annie High Effort Storm?

When you see FNF High Effort Games, it means that the song that you were used to has been taken and made way more difficult and hard to conquer, meaning that these games are aimed towards those of you who play these rhythm games a lot and want to challenge yourselves all the time, just like we are hoping you will do right now with this game called Friday Night Funkin vs Annie High Effort Storm!

Challenge Annie once more, this time on an even harder song!

Annie is the avatar of the famed FNF modder and YouTuber atsuover, and in this game, the original Storm song from the first version of the mod has been remixed and made even more difficult, resulting in a new challenge for you!

Despite being more complicated, the way you face off against Annie remains the same. When arrow symbols above BF match, press the same arrow key on the keyboard to hit the note and do this until you finish the song.

You lose in case you press the keys at the wrong times too many times in a row, so focus and don't allow that to happen for anything in the world! Enjoy!