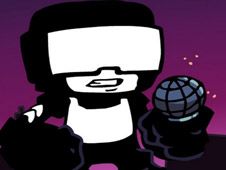 Only on our website can you find and play new FNF Games online as awesome as the ones we bring over for you day after day, just like we are doing right now with Friday Night Funkin' Ugh Hight Effort 2.0, an upcoming mod featuring Tankman as the antagonist and which has the Ugh song as its main theme, with us being very excited for this new version, as you should too!

Get to know your antagonist: Tankman

As you can see from a quick glance, Tankman is a soldier, with him being dressed up in a black and white suit, his uniform having clothing usually associated with military officers, such as sturdy boots, a helmet, gloves, a vest to protect from bullets, and a visor. He also has corporal insignias on his arms, showing that he is higher in rank than other soldiers you previously met in the series.

The character is also known as Captain Tankman, and he originates from a series on Newgrounds called Tankmen from 2006. He and his best friend, Steve, travel through the desert territory after the apocalypse where only tankmen survived, and different factions fight against one another.

How to play the High Efford Mod online on our website:

Just like in previous games, you have to defeat the antagonist by having good timing and rhythm, as you fight against Tankman in various songs. Tap the arrow keys at the right moment when they match with their symbols from the screen in order to hit all the notes and the dance moves correctly.

You can choose to play the game in either the story mode, where there will be an adventure for you to go through and where you learn more about the characters, or just have one-off battles in the Free Play mode, using the songs you like the most.