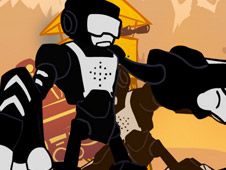 What is FNF: High Effort Week 7 Minus Tankman?

Lately, there have been more and more FNF Minus mods here for you to play, and we are delighted that we could bring them along, just like we are doing today when it is the first time ever where you get to play together and against the Minus Tankman character, who looks sort of like a Gundam character, and you will face off against him in his original songs, but remixed, to make the mod a high effort one:

Defeat the robot Minus Tankman to show you are a master of rhythm!

Choose to battle this character in either the story mode or the free play mode, and then give it your best to reach the end of the songs by playing all their notes according to the charts, something that you do by pressing the arrow keys at the same time as the arrow symbols above BF's head match one another.

Of course, make sure not to lose by pressing the keys wrong too many times in a row, which can happen if you are not focused enough. Good luck, and enjoy!