FNF: Stop Posting About Among Us VS Tankman 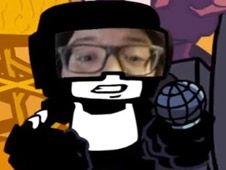 What is FNF: Stop Posting About Among Us VS Tankman?

Stop Posting About Among Us is a meme character in the FNF Games series that has now suited up as Tankman, and you and Boyfriend have the duty of defeating it in a musical battle, something that we invite you to do in this awesome new rhythm game, and do it on all of Tankman's songs you love so much!

Come play one of the funniest FNF mods so far!

When you see that arrow symbols above BF are matching with one another, match that timing and press the very same arrow keys, and keep doing it until the song ends, turning the progress bar towards you to win.

Be careful not to press the wrong keys or get the timing wrong, because if you do that mistake too many times, you will have missed too many notes of the song, and lose. Good luck to you, and we hope this is far from the final FNF mods you play here!