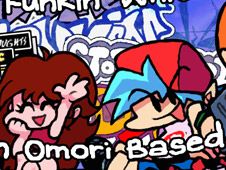 What is Bf’s Funkin’ Whitespace – Battle Among Friends ?

In Bf’s Funkin’ Whitespace you are now going to have an FNF Battle Among Friends, which is also the name of the song, with the fight taking place between Boyfriend, of course, as you control him, but you do it against Pico and GF, who you thought were on your side, but not right now, today they are your musical rivals!

Have an FNF Battle Among Friends in BF's Funkin' Whitespace!

When arrow symbols match above your character, press the identical arrow keys to hit your notes, and if you are doing it until the song's conclusion, you win but be careful not to miss your notes multiple times in a row, you will end up losing and having to start again from scratch. Enjoy!