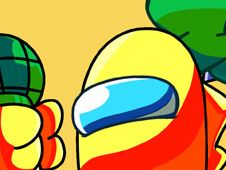 What is Friday Night Funkin’ – Among The Airship?

Boyfriend finds himself Among The Airship in this new FNF x Among Us mod we are delighted to showcase you, since you will be facing against a new yellow astronaut in a rhythm battle with brand new songs, and they are:

Win the FNF Among The Airship battle!

In either mode, you will be playing, make sure you reach the end of the songs by playing their notes according to the charts, which is how you achieve victory.

To do it, press arrow keys at the same time as the identical arrow symbols match above BF. Be careful not to miss doing it multiple times in a row, you will end up losing. Good luck, enjoy!