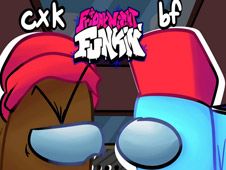 What is FNF vs CoryxKenshin Impostor (Airship Rivalry)?

CoryxKenshin is a brand-new impostor from FNF who is the newest antagonist that you and BF will have to face off against in a musical battle, the mod is called Airship Rivalry, and the songs are the following ones:

Let's win against the CoryxKenshin Impostor!

From the main menu, you will have to choose between the story and free play mode, and in either case, you have to give your best to reach the end of the songs by playing all their notes according to the charts, since that is how you win.

This means that you watch for when arrow symbols match above BF's head and press the identical arrow keys. If you miss doing that multiple times in a row, you lose and have to start again from scratch. Enjoy!