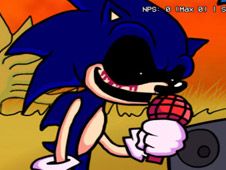 What is Friday Night Funkin’: Vs. Sonic.Exe?

Defeat scary Sonic and bring him back to his normal self!

You can play this game in either the story mode or free play mode, where you have to play all the notes of the songs according to their charts, and when you reach their end, you will see the progress bar tilted towards you, and you will have won.

To play notes in this kind of game, press the arrow keys at the same time as the arrow symbols above BF match one another, but know that missing too many notes in a row means losing the game. Enjoy!