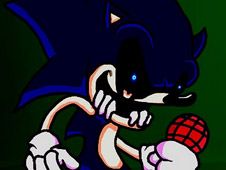 What is FNF: Confronting Yourself – Master Of Chaos – SONIC.EXE?

Girlfriend is trapped in the Emerald, and the only way to free her is if you will defeat the returning antagonist that really scares us all, Sonic.Exe, who has arrived in this new mod with two new awesome songs, which are called as follows:

Defeat Sonic.Exe, his chaos, and free your beloved!

After making your choice between the story mode and free play mode, give it your best to reach the end of each song, which is when you win, but that only happens if you play all your notes according to the charts, when your turn comes.

To do this, you need to watch for when arrow symbols above BF match one another and press the identical arrow keys at the same time. Don't miss doing it multiple times in a row, or you lose and have to start again from scratch. Good luck!

FNF vs Impostor Among Us Restyled
ADVERTISMENT