FNF: Tails And The Homies! (Ain’t No Fun) – Confronting Yourself

FNF: Speed VS Ben (Confronting Yourself) 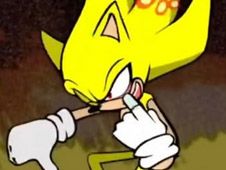 What is FNF: Sonic.EXE vs Sonic Confronting Yourself Remastered?

FNF: Sonic.EXE vs Sonic Confronting Yourself Remastered is going to be even better than the original mod that this one was inspired by was, that you can trust us, as you can't go wrong with a rhythm battle between the good Sonic and the evil one, especially with the following tracklist:

Sonic.Exe Vs Sonic, a remastered FNF mod is here!

To win on any of the two songs you need to reach their end, and to do that you have to play all their notes according to the charts, something that you do by pressing the arrow keys at the same time as the identical arrow symbols match above Sonic. Don't miss doing it multiple times in a row, or you lose and have to start again from scratch. Good luck, enjoy!