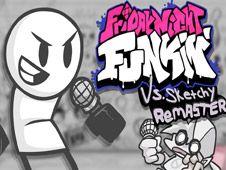 What is FNF Vs. Sketchy Remastered?

The FNF Vs Sketchy mod that we've already had on our website had been received very well since it featured this lovable stickman sketched character that people seemed to love a lot, and his songs were really cool as well, so of course, we would be excited that right at this moment we can share with you the remastered version of that mod, where the graphics are better, the animation is more dynamic and looks better, the songs sound cleaner, and, frankly, everything is better!

Take on Sketchy the stickman once more, and win once again!

You can play in either the story mode or free play mode, and you should choose your level of difficulty depending on how many FNF Games online you've played before and your level of experience. To win, you will have to turn the progress bar more towards your favor by the time you reach the end of the song.

How? Well, by playing the notes of the songs at the right time. When the arrow symbols match above BF's head, press the same ones on your keyboard at the exact same time. Be careful not to miss playing notes too many times in a row, because if that happens, you lose and have to start again. Good luck!