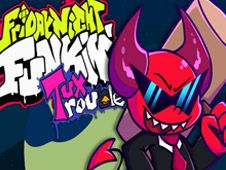 What is FnF vs Tux Trouble REMASTERED (VS. Beastie)?

Beastie is a red demon guy with sunglasses who is an OG villain from the Friday Night Funkin Games series, who we are now very happy to welcome back in the fold as he is now once again an antagonist for you to defeat, this time with his original mod having been remastered, so it looks way better than the first one, the music is improved, and the whole experience is better. Of course, there are also plenty of new songs added, to make things even more fun:

Do you have what it takes to defeat Beastie once more? Let's find out!

No matter in what mode you play this game in, or what level of difficulty you pick, you will have the same goal, which is playing all the notes of the songs according to their charts, reaching the end of the songs to win.

This means that when the arrow symbols above BF's head match one another, you will have to press the same arrow keys, and you need to keep doing it until the song ends.

Be careful not to miss pressing the keys too many times in a row, since that happening means losing the game and having to start again from scratch. Have fun!