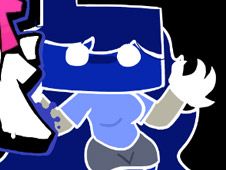 FanGirls from FNF have teamed up together on the song called Triple Trouble, maybe this way they will defeat Boyfriend, so show them who is still the musical king, with this mod featuring some fan favorites like Cloud, Sky, Meri, and Beepie. Let's start!

Boyfriend Vs The FanGirls, it's trouble, and make it triple!

To win over these girls you need to keep playing your notes according to the charts until the song's conclusion, winning at that moment. So, when you see arrow symbols match above BF's head, you press the identical arrow keys and keep doing it, but be careful not to miss too many of them in a row, since that leads to you losing. Enjoy!