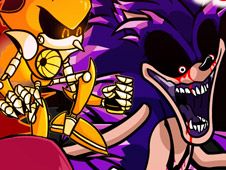 The FNF Final Triple mod features an Encore version of Triple Trouble that has been extended to no less than 11 minutes, making it one of the biggest and best songs you could be playing today on our website, where we are sure you will have tons of fun as you sing against Sonic.Exe and other characters from its universe!

When floating arrow symbols match above Boyfriend's character to the right, that is when you need to press the identical arrow keys to hit your notes, and if you can keep doing it until the song ends, you win but know that missing to hit your notes too many times in a row leads to you losing, so focus not to let it happen but win instead. Good luck, enjoy!