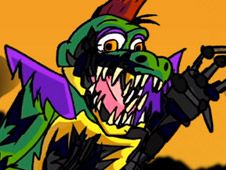 What is FNF: Triple Trouble but FNAF Security Breach Sings it?

Help Freddy, Roxanne Wolf, Monty Gator, and Glamrock Chica, characters from FNAF to sing their own version of Triple Trouble from Friday Night Funkin', which is already an iconic song where multiple characters get to sing with one another!

Triple Trouble x FNAF, the FNF mod you were waiting for!

Watch for when arrow symbols float and match above your character, and at the same time press the identical arrow keys to hit your notes, doing so until the end of the song to win, because if you miss hitting the notes multiple times in a row, you will end up losing and having to start again from scratch. Good luck, we wish you all the best, as per usual!