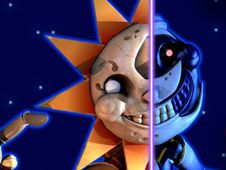 What is FNF Daycare Deathtrap vs FNAF Security Breach?

Many new and old animatronics from FNAF is now in FNF, where you and BF now have to defeat them in a rhythm battle and have tons of fun with all the following songs:

Can you survive the FNAF Security Breach in the Daycare Deathtrap of FNF?

After making your choice between the story mode and free play mode, in either case, give your best to reach the end of the songs by playing all their notes according to the charts.