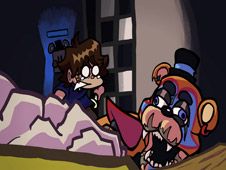 FNF: Glamrock Freddy & Gregory Sings Squid Games (FNAF) is a three-way crossover between Friday Night Funkin, Five Nights at Freddy's, and Squid Game, three of our most popular categories all brought into one single game, where these FNAF characters are having a rhythm battle on a song called “Squid Games”!

You need to win by playing all your notes according to the charts until their conclusion, so when you see arrow symbols floating above your character's head, press the identical arrow keys. That is how you win, but if you miss hitting those notes too many times in a row, you lose. Good luck, and stay around, we've got more surprises coming!