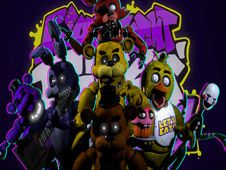 What is FNF vs FNaF (vs Freddy, Chica, Foxy, Bonnie)?

It's here, the FULL version of FNF Vs FNAF, with all four characters that are iconic to the series being presented as antagonists for you and BF to defeat, and each have their own full week, meaning that this game has no less than 20 songs, with some of them being cool bonus ones as well:

Whether you are playing in the story mode or free play mode, winning is achieved in the same way, by reaching the end of the songs and to do that you need to keep hitting your notes until their end.

How? Well, you press arrow keys at the same time as the identical arrow symbols float and match above BF's head, but be careful not to miss doing it too many times in a row, or you lose. Good luck, and stick around for more, you won't regret it!