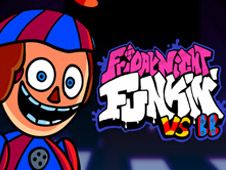 What is FNF vs Balloon Boy from FNAF?

Balloon Boy from FNAF is a scary animatronic that looks like a cute boy holding a balloon, but he is as scary as his other friends from Freddy's Pizzeria, even when you and BF battle him in music on the song called 'Balloon'.

Boyfriend VS FNAF's Balloon Boy, yet another scary music battle!

To win this confrontation you need to reach the end of the song by playing all of its notes according to the charts, so when you see arrow symbols floating above BF's head, press the identical arrow keys from your keyboard, since that is how you hit notes, and reach the end to win.

If you miss hitting the keys too many times in a row, you lose because you've messed up the chart too much, so be careful not to let it happen. Good luck, enjoy!