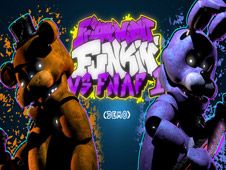 Welcome to FNF Vs FNAF 1, the best FNF X FNAF mod that we've had on our website so far, no doubt about it in the world, something that can easily be seen from the graphics, sound quality, animations, and all the other details, and we can't forget about the songs either:

Whether you choose to face these creepy characters in the story mode or free play mode, you need to do the same thing to win, which is to play all your notes according to the charts until the conclusions of the songs.

To do that you have to watch for the moment when arrow symbols float and match above BF's head, and press the identical arrow keys at the same time.

Be focused so you don't press the keys early, late, or press the wrong keys, because if you miss the notes too many times in a row, you lose and have to start again from scratch. Good luck!