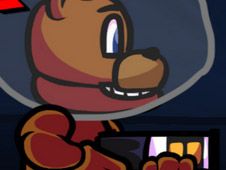 What is FNF X FNAF 57 Freddy in Space?

FNF X FNAF 57 Freddy in Space is a brand new crossover of these two beloved categories, where we give you one awesome song to sing on, called 'spinoff', created by Jautrey.

When you see floating arrow symbols match on the top right side of the screen, above the character on that side, you need to press the identical arrow keys to hit your notes and do it until the song ends to win, while being careful not to miss too many notes in a row, because if the health bar depletes totally, you lose and need to start again from scratch. Enjoy!