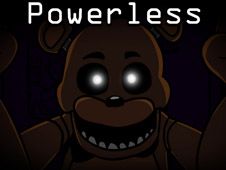 What is FNF vs Freddy Fazbear (FNAF) – Powerless?

A brand new FNF Vs Freddy Fazbear from FNAF mod has just been added for you all here right now, knowing how much you love the crossovers between these two categories, and BF will now fight this evil animatronic on a track called 'Powerless'!

Don't be powerless and help BF defeat Freddy from FNAF!

To win you need to reach the song's conclusion with the progress bar towards you, and to do that you need to hit all the notes of the songs according to the charts. This is done by pressing arrow keys at the same time as the identical arrow symbols float and match above BF's head.

If you press the wrong key, or press the right keys but too early or too late, that is a missed note, so be careful, because if you miss multiple notes in a row you lose and have to start again from scratch. Enjoy!