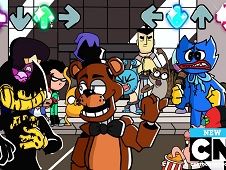 What is FNF Roasted but Freddy, Bendy, vs Huggy Wuggy?

Sing FNF's 'Roasted' song against some of the most popular horror video game characters of the moment, meaning none other than Bendy, Freddy, and Huggy Wuggy, with the first two teaming up against the blue monster, the new one in town!

Huggy Wuggy Vs Freddy and Bendy, an FNF Roasted experience!

As arrow symbols match above your character on the right, that is when you have to press the identical arrow keys to hit your notes, something that has to be done until the song concludes. Don't miss hitting the notes too many times in a row, or you lose and have to start again from scratch. Good luck, enjoy!