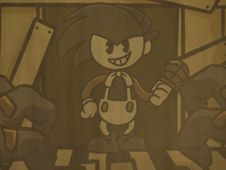 What is FNF Vs Bendy Joey’s Lost Tapes: Forsaken Projection?

The ink Demons from Bendy Joey's Lost Tapes are back to haunt and defeat Boyfriend in FNF, but in this new mod called Forsaken Projection, we are sure that you are ready to help the protagonist win on all these following tracks:

Can you defeat the demons of FNF Bendy Joey’s Lost Tapes?

If you think so, face them in either the story mode or free play mode, the choice being yours, and in either case, give your best to reach the end of the songs by hitting your notes according to the charts, which is how victory is achieved.

To do it, when you see arrow symbols match above BF's head, you will have to press the identical arrow keys to hit your notes. Don't miss doing it multiple times in a row, or you lose and have to start again from scratch. Good luck, enjoy!