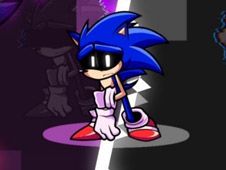 What is FNF: Lost My Mind + Breaking Point?

FNF: Lost My Mind + Breaking Point is a brand new FNF mod with Sonic where he has to face off scary versions of himself, as he has gone mad and doesn't know who he really is anymore. The two songs are the ones from the title, and we're sure you will really enjoy them!

Help Sonic win the Lost My Mind + Breaking Point songs and get back to his senses!

After you've made a choice between the two modes, in either of them, play notes according to the charts until the songs end to win, doing so by pressing arrow keys at the same time as the identical symbols match on the right.

Make sure not to miss your notes too many times in a row, that will lead to your loss and having to start all over again from scratch. Good luck, enjoy!