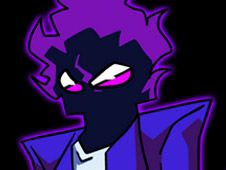 What is FNF vs Psychic (Mind Games Mod)?

A new day means a new chance for the visitors of our website to play the best new Friday Night Funkin Games on the internet, just like they will be doing right now with FNF vs Psychic (Mind Games Mod), a brand new mod we are very excited about since it has new antagonists, and new music, and what else would you want

Late night at the Parent's house, Boyfriend encounters a Psychic who was put in charge of protecting the place, and because he did not like him, he started putting on some mind tricks on Boyfriend, so now he needs your help to get into a rhythm and win the musical battle and escape.

So far, this character has only one custom song, but we're sure that more will appear soon enough. Reach the end of the song and have the progress bar turned in your favor to win, and that only happens if you have a good enough rhythm that you sang the song correctly.

This means that when the arrow symbols match above BF's head, you have to press the same arrow keys on your keyboard, but be careful not to miss pressing too many keys in a row, since that causes you to lose the game. Enjoy!