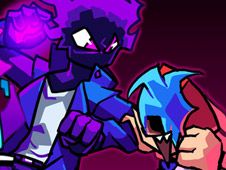 What is FNF vs Psychic (Mind Games Mod) FULL?

Psychic now returns as an FNF antagonist for you and BF to go up against in a rhythm battle, and this time he has more guts to him, as his mod is now in its full version, meaning that there are three songs that you will now do battle on, two more than the demo version, and it's just him featured here, not other characters. The songs are:

Rhythm comes from the heart, not mind, so let's defeat Psychic!

Whether you face this character in the story mode or free play mode, the way you win is the same, by reaching the end of the songs, and that only happens if you play all their notes according to the charts, correctly.

This means pressing arrow keys at the same time as the identical arrow keys match above BF's head, but know that if you miss doing that multiple times in a row, you lose and have to start again from scratch. Good luck, we wish you all the best!