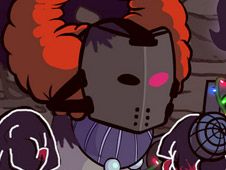 What is FNF vs Corrupted Tricky v2 Full Week?

It seems that even Tricky got corrupted by the virus, and, now only you and Boyfriend can defeat this even scarier version of the character, something we invite you all to do right now with the amazing mod known as FNF vs Corrupted Tricky v2 Full Week, where all the four iconic Tricky songs have been remixed, re-charted, and made in the corruption style:

Whether you are playing in the story mode or free play mode, the way to win is the same, and it is by reaching the end of the songs and by playing all of their notes according to the charts.

This is done by you pressing arrow keys at the same time as the identical arrow symbols match above BF's head, but be careful not to miss doing it multiple times in a row, or you lose.

Good luck, we wish you all the best, and invite you to stick around all day long, not to miss out on any of the fun!