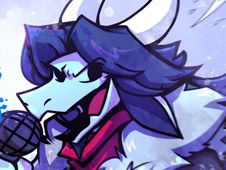 What is FNF vs Ace (Full Week)?

Ace is an elemental dragon, meaning that he represents an element of nature, and that element is snow, with him being the newest antagonist that you and Boyfriend have to face off against in a musical battle, and he is one of the few dragons you have fought here so far, so trying this game out is a must, believe us! This being a full week, you've got four custom songs to battle on:

Give it your best to defeat Ace, the Snow Dragon!

This character can be battled against in either the story mode or free play mode, it's up to you, and in both modes you've got to give your best to reach the end of the songs by playing all their notes along the way.

How? Well, when you see arrow symbols above BF matching with one another, you have to press the same arrow keys, and you have to keep doing that until the end of the song to win.

If you miss pressing too many keys one after another, you lose, so be careful not to let that happen for anything in the world. Good luck, and enjoy this game as only here is possible, where we bring you the best games with FNF!