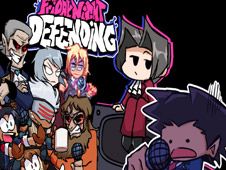 Ace Attorney is one of the most memorable video games ever, with the main character even has become a meme at some point, with this being a funny game from Japan where you have to play the role of an attorney, and it is this character that replaces Boyfriend right now as the protagonist who has to defeat other characters from their games, now in musical battles, not in court!

Help Ace Attorney defeat all his rivals, now in music!

You will be able to challenge the various antagonists in either the Story Mode or in the Free Play mode, it is up to you, and you win each contest by reaching the end of the songs and turning the progress bar in your favor.

This means that when arrow symbols above Ace match with one another, you have to press the very same arrows right after that and be careful not to miss too many notes, or you lose. It's that simple, so start right now, and we wish you good luck!