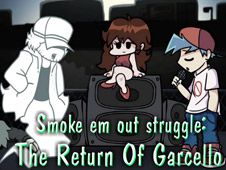 What is FNF vs Garcello’s Return?

After his defeat and eventual death at the hands of Boyfriend, Garcello is back from the dead and ready for another round of rhythm battle against his greatest rival, and to make things more fun he has brought along other antagonists to help him win, so this game also features characters like Zardy, Whitty, and Sarv, all of which you will battle together on four custom tracks:

Defeat the ghost of Garcello and send him back to the realm of the dead!

What you do in this game is very simple, and we will explain it to you in case you're a newcomer to the series, but so far, know that you can challenge these characters in either the story mode, where you've got dialogues and cutscenes, or remove all of that and just focus on the songs with the free play mode.

When you see arrow symbols above BF being matched with one another, press the very same arrow keys to match and keep playing the notes of the songs until the end, but know that you lose in case you miss hitting too many of the notes one after another. Enjoy, and have fun as only here is possible!