Vs Deimos – A FNF Mod 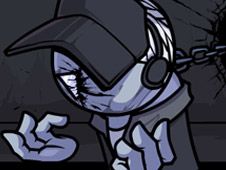 What is FnF: Deimos Over Garcello?

Deimos is a very popular assassin character coming over from the Madness Combat series, of course, and he is now making his long-awaited debut in the FNF Games category of our website, where he has now replaced the popular Garcello character, for you and Boyfriend to try and defeat him on the awesome custom songs of the Smoke 'Em Out Struggle mod, so you can bet that a lot of fun awaits you right now!

Boyfriend Vs Deimos, the best music battle of the moment!

No matter if you choose to play this game in either the story mode or the free play mode, your goal remains the same, which is playing all the notes of the songs according to their charts, reaching their end, and winning!

To do this, when you see that arrow symbols above BF's head match one another, you need to quickly press the same arrow keys but don't miss to do that too many times in a row, or you lose and have to start again from scratch. Enjoy!