FNF: Epiphany, but Everyone Sings it 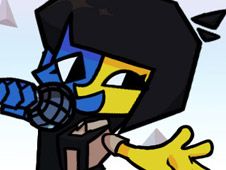 What is ENA over Boyfriend?

ENA over Boyfriend is our latest FNF mod online for free we get to share with you on our website, where ENA is a new character that replaces Boyfriend through all the six weeks of this game, with Ena being a girl whose design has been inspired by a Picasso painting, with her face and body being divided into two colors, blue and yellow, and she is made up fo really straight lines, which you won't see anyone in real life looks like.

Can you help Ena have a great rhythm and defeat all antagonists?

Just like you've helped BF many times before, you now do the same thing with Ena, having to do your best to reach the end of the songs with the progress bar having turned in your favor, and you can do this in either the story mode, where you learn more about the character, but if you don't care, you can just have simple matches in the Free Play mode.

When you see arrow symbols match above Ena, that means you have to press the same arrow keys on your keyboard, at the exact same time, so that you play or sing the note of the song at its place in the chart. Make sure you don't miss playing too many notes in the song, because if that happens, you lose and have to start again. Have fun with Ena, and stick around for more of our mods!