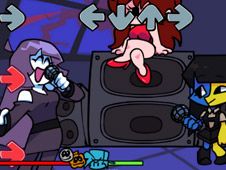 What is FNF with Lila & Ena Sings EEEAAAOOO?

Lila and Ena are both two characters that haven't been around in our FNF Games category in a while, and we're very happy that they are now both making their return at the same time, in the same mod, where together they are going to sing the iconic track known as EEEAAAOOO, which is sometimes attributed to the Spooky Kids.

Hit the play button to start, and give it your all to reach the end of the song and play all their notes according to the charts, winning once that happens. This means that when arrow symbols match above your character, you need to press the identical arrow keys from the keyboard.

Be careful not to miss pressing the keys multiple times in a row, since that leads to you losing. Good luck, we wish you the best, and we invite you to stick around for more daily games to play!