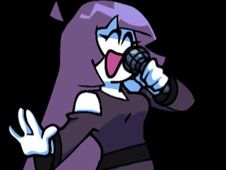 What is FNF: EEEAAAOOO + Lila?

A new opportunity for you to have fun with new FNF Games online has just come up for you all, which is why we hope that none of you who are now on this page for the FNF: EEEAAAOOO + Lila mod will miss out on playing this game, and considering how we know fans of this series to be, we're highly positive this is not going to happen!

Lila might seem scary at first, but she is actually the mother of Skid from Spooky Month, and in one of the series's cutscenes you could see her hiring an exterminator to kill a rat that is actually possessed by a demon. She has pale white skin, long purple hair, and she wears only black and purple clothes. In this special version of the mod, you will be able to play the custom song called EEEAAAOOO.

Now, for those of you who might be new to the franchise, allow us to teach you the gameplay of this series so that you can give this game your best from the start!

You have to press the arrow keys on the keyboard when the corresponding arrow that is floating above Boyfriend matches the ones on top of him, in order to hit all the notes properly.

Missing the notes too many times causes you to lose, so don't let that happen, because if Lila is not defeated, Boyfriend and Girlfriend will never get together!