FNF Cosmic but every turn a new character sings it

Dating Night Funkin’ But Every Turn a Different Character Sings

FNF: Roses Remix But Everyone Sings it 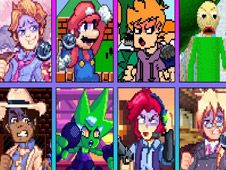 What is FNF: Roses Remix But Everyone Sings it?

It's always a ton of fun to be playing the latest FNF mods added for free on our website, which is why we are very happy that right at this moment we could share with you all the game called FNF: Roses Remix But Everyone Sings it, where, just as the title suggests, you play the iconic Roses track from Week 6, but not with just Senpai, but other characters, such as Sonic, Miku, Whitty, Baldi, Pico, Mario, Monika, and so many others that we would not even have the space for it!

For each verse of the song, there will be another character singing it, but it's still you who has to watch for when the arrow symbols match above them, and, when they do, you have to press the same arrow keys, something you have to do until the song ends if you are to win it, simple as that.

This also means that if you miss pressing the arrow keys too many times in a row, you are going to lose the whole game and have to start it again from scratch. Enjoy!