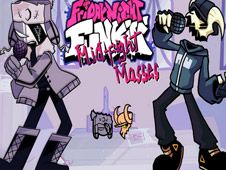 What is FNF: Ruv and Tabi sings Zavodila?

Zavodila is an iconic song coming from the Mid-Fight Masses mod of FNF, and now it is going to be sung by none other than Ruv, a character also from that mod, but also one that comes from a different mod, and that is Tabi, a.k.a the Ex-Boyfriend, and we will hope that together with these two characters you take the song all the way to the end!

Ruv and Tabi, an unexpected but welcome rap battle!

When you see arrow symbols matching above your character's head, at that moment you will have to press the same arrow key on the keyboard, and you have to keep doing so until the end of the song in order to win, simple as that!

Be careful not to miss pressing the keys too many times in a row, since too many missed notes in the chart will end up with you losing the whole rap battle, and you can't want that to happen, right?

Good luck to you, we wish you the best, and hope to see more of you around!