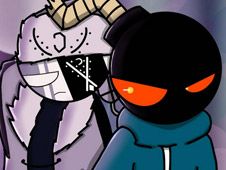 What is FNF: Fun Size Whitty on Gospel and Zavodila?

Boyfriend has already face off against the antagonists of the Mid-Fight Masses Mod, who are all reputable and know their stuff when it comes to music, but today, the one facing off against this character is none other than fun-sized Whitty, meaning a very small Whitty, who, despite his new smaller size, is still as angry as ever, and ready to explode!

Fun Size Whitty Vs the demon nuns and priests: battle on!

You are going to use the arrow keys to hit the notes of the songs, with you having to watch the arrow symbols that float around Boyfriend and press the arrow keys at the same time as those floating arrows match above BF's head, but be careful not to miss doing that too many times in a row, or you lose.

If you reach the end of the songs doing so, you win, and the progress bar will tilt towards you. Good luck, and enjoy this game as only on our website do you get to do it! Have fun, most importantly!