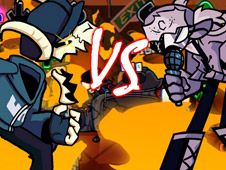 What is FNF: Tabi vs Ruv Full Week?

It seems that a brand new rivalry is brewing in the world of FNF Games online, and it is between Tabi and Ruv, who are now going to battle it out in this awesome and brand new full week mod, where Ruv becomes the protagonist, and you will have to defeat Tabi on the following custom songs:

Tabi Vs Ruv, the fight of the moment!

Choose between the Story Mode and the Free Play mode, and then give it your best to reach the end of the songs in them, playing all the notes according to the charts. This is done using the arrow keys, which you have to press at the same time as the arrow symbols above Ruv match one another.

Try to focus so that you don't miss out on pressing the keys too many times in a row, or you lose the whole game and have to start it again. We wish you all good luck, tons of fun, and we hope that you stick around for even more of it to come!