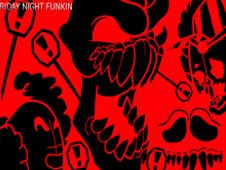 What is FNF VS Tricky Full Week Remixes?

Tricky has constantly been one of the most popular and most encountered characters in the world of Friday Night Funkin' Games online, and we are happy that there is still more room for this Madness Combat character since his games never disappoint, just like you will see right now when you can play FNF VS Tricky Full Week Remixes, which is a full week mod that features remixes of the songs in the original:

Defeat Tricky once more, this time on the coolest remixes!

Whether you do this in the story mode or free play mode, know that you've got the same purpose, which is reaching the end of the songs by playing their notes according to the charts, so that once the progress bar is fully towards BF's side, you win!

To do this, watch for when arrow symbols above BF match one another, and, when they do, press the same arrow key yourself. Be careful not to miss pressing the keys too many times in a row, since that leads to losing. Enjoy!