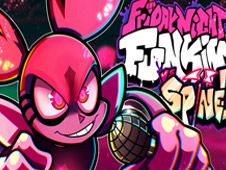 What is FNF vs Spinel Full Week?

Spinel is both a villain from the Steven Universe series on Cartoon Network, and an antagonist in the world of Friday Night Funkin' Games online, and while there was a mod featuring her with one song, this time we bring you the full week version, where you and BF will have to defeat this character on four awesome songs:

Do you have what it takes to defeat Spinel through music?!

In either the story mode or the free play mode, it's up to you, you will have to give it your best to reach the end of the songs, playing all their notes according to the charts, so when you see that arrow symbols are matching above BF's head, you will have to press the same arrow keys yourself.

Be careful not to miss doing it too many times in a row, because if that happens, you lose the game and have to start it again from scratch. We wish you all the best, tons of fun, and we hope that you stick around for more fun!