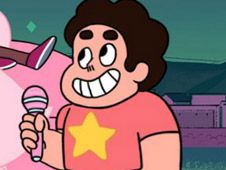 What is FNF Spinel vs Steven?

We love nothing more than to see Friday Night Funkin Games online cross over with some of the most popular proprieties in mainstream media, which is what happens once more right now on our website when we are happy to invite you all to play the game called FNF Spinel vs Steven, which is also making our category of Steven Universe Games even better!

Help Steven save the galaxy against the evil Spinel

Steven is the newest gem that protects Earth, so he has to fight off against various alien threats to save his planet, and the newest alien that puts us in danger is Spinel, so Steven needs your help to take him out, but instead of using magic or fighting, you will use the power of music, in a rhythm battle on a song called Other Friends.

Despite Boyfriend not being present in this game, the gameplay remains the same. You have to get all the notes of the song at the right time, so when you see the arrows on the screen match above Steven's head, tap the same arrow key on your keyboard, not faster or later, because that counts as a miss, and too many misses in a row mean losing the game.

Now that you know all this, we can only wish you good luck, invite you to start the fun right now, and we hope to see you around even more today!

Use the arrow keys to win the rhythm game!